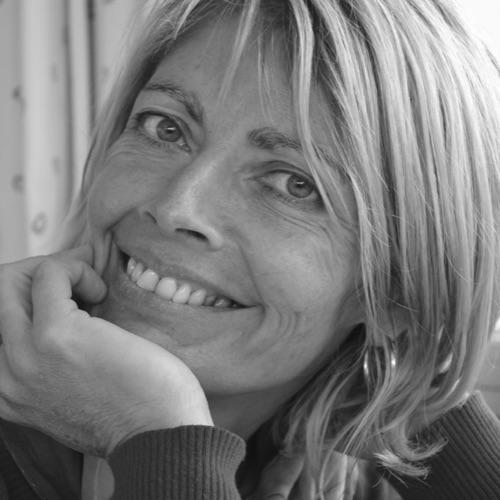 FEAR CAN NEVER PROTECT US

Massive threats. Heightened state of alert. Evacuating homes and neighborhoods and airports. Fear and terror everywhere. I've heard it too. The bloody senseless attacks in Paris. Of course I heard it. But have I seen it? No. I refuse to see the images. I do not watch the news. Once images are burned on my retina, I can’t detach them anymore. The images generate feelings of horror and disgust. And then I’ll join everyone in massive fear hypnosis. And then I ask myself: what is this good for? What good is it to live in fear of terror threat?

I'm asking myself how people handled this kind of information in times when television did not exist and those horrible images could not been sent and scattered all over our lives. Often, they did not know. We got to read it in the newspapers, and there were often no images at all, or only images in black-and-white. I wonder whether it is good for journalists and photographers to elbow through the places of horror to send sensational images and stories into the world. It seems like misery and death are the scoop, day after day. Mass hysteria is awakened by this. I wonder what this is good for.

I also wonder whether I will participate. I've heard it, yes. I've done a bit of reading on the Internet newspaper. But I will not participate in the massive effort to spread fear throughout the world. I have felt the fear, yes, I admit it, but not when hearing or reading about the horror in Paris; I felt it when reading a text from a link on Facebook about a threat stating that all libraries, schools, discotheques and other places of corruption would be blown up. The text dates back to August and is now being stirred up again to stimulate the mass hysteria a little bit more. I could feel the fear in my body swell along with the vividness of the images in my mind. What was I doing? Scaring myself. What is that good for? I let the fear invade my body for two minutes, then I admonished myself. I realized that this moment was the perfect moment to realize I did not want to get involved in the terror-mania. If we had no television or Internet, wouldn’t the fear be much less? Terror organizations would not be able to develop and perhaps would not even exist without the possibility of creating such an extensive network. Originally the www, meaning the World Wide Web, was meant to unite people. We never thought it would be a web of terror. We never thought that we, thanks to the quick way of connecting with each other, would send so much hatred and fear into the world.

I wonder whether now is not precisely the time to join again in love. Love to all. I hear you think "that woman is mad, she wants to send love to terrorists and extreme Muslims ?!" I think they need more love than anyone. To an extreme degree. If they behave so extremely violent, what does that mean? They lost all connection with the Universe, with the Predominant Energy of Love. Otherwise, they would not behave so extremely aggressively. Their whole behavior is a cry for love. Consider this: if all those people felt love in their hearts and felt loved, they would spread love instead of hatred. The thing is, they have such a huge love deficit. To an extreme degree. It is love they need. To an extreme degree. Only when they allow love into their lives again  will they be able to replace hatred with love. And they can spread love instead of hatred. We must show them the way.

Is this the fault of the media? No, it is an individual matter for each person separately. Anyone who has a television can consciously choose what he watches or not. Anyone who has a tongue can consciously choose what he's talking about. Anyone who has consciousness can choose to what he is giving his attention and where he wants to help.
Dear friend, I invite you right now to be aware of your choices. Do not think you have no choice. Do not be fooled into thinking that you are a victim. You can choose where you focus your attention. Do not be swayed by fear. And certainly not by hatred. That way you would indeed contribute to knitting the blanket of fear and hatred that planet Earth is sunken in by so many thoughts and acts of hatred and fear of the past and present. I prefer to knit a bit more of the blanket of love around the world. I do this one thought at a time. Every thought is a stitch that I add to the large blanket around the world. From time to time I drop a stitch. If I become aware of it, I pick up the lost stitch and close the hole, so that the tissue of love remains solid.

What are you going to do? Will you get carried away by fear? Then you will play into the cards of the extremists. Their actions are based on the erroneous belief system that if they wipe out everyone who does not have the same belief system as theirs, they will eventually find peace on earth. A tragic mistake of course. They need understanding, light, love. Not hatred. But if you allow yourself to be overwhelmed by the fear that is aggressively but also subtly disseminated through the media, then you are using the erroneous belief system that pretends your fear might protect yourself and your loved ones. You can protect only through love.

Now, imagine someone on an island somewhere in the ocean, who has no television and no contact with the outside world beyond his village. The attacks happened in the same world we live in, but the difference is that he’s not aware of it. How does his life continue after the attacks? Just as before: peaceful, in connection with nature and the whole universe. He knows no better. We know. Is that better? I wonder what good it is to know it all. Is there more peace on earth since we have been flocking to watch television and since the bad news has been broadcast five times a day and in times of catastrophe we have been getting additional newscasts? Is there more love on earth since we have been provoking each other with terror threats? Is there more concern for one another since we have been dishing up fear as daily fare on television and the Internet and in our conversations with each other? No! On the contrary! Terror, cruelty, hatred, terrorism, poverty and insecurity have increased enormously. And we contribute to this by talking about it, by fantasizing about it, by being afraid, and by watching it.

Just now, we have to give a counterweight by consciously focusing on what we want: peace! We must keep our focus away from what we do not want to see increased: manifestations of hatred. I let my television off to such mischief messages. I seize the opportunity to further focus my attention on love, because planet Earth is in urgent need of a Higher Vibration, and we can only achieve this by focusing on the energy of Love with as many people as possible.

If I do not do it as a conscious human being, who will do it? I am not only responsible for myself and for the energy that I send out around me; I'm also responsible for what I spread around me for the benefit of the whole planet and the evolution of Gaia, the Earth. If people like me who is writing this, and you, who are reading this, allow ourselves to be carried away by fear, then we can legitimately wonder where the world is going. You and I need to focus consciously on what we want to see happen: love and peace.

Nobody needs more love than the person who behaves as a loveless person. Can you imagine how much love those terror organizations need? Let us focus our attention on them with love and send them so much love that the hatred they feel will melt into life. Let us help them, with our thoughts and consciousness, remember that they are also divine loving beings at the start. One day they will realize that the solidarity and world unity they are desperately looking for can only be realized through loving behavior and peaceful thoughts towards everyone. Let us help them achieve this goal of world peace. We should give the good example and not answer with hatred. Otherwise we are not busy creating world peace either.

I absolutely do not want to minimize the pain and grief of those who have lost someone through the attacks. There should be room for all of those feelings. Maybe after a while they can look at the situation like this: their loved ones might have died to make us all aware ‘en masse’ that we should give much more attention to love and peace, and that we must consciously let go of our fear. For love and fear are bad matches, both in individual relationship and worldwide.

With this article, I want to invite you to think about this. It's your choice what you want to knit a bit further: the blanket of fear or the blanket of love.